Blow out the cobwebs, not the budget

There comes a time when you just need to get away; whether your running from a problem, stressed at work or just fed up. This weekend, I took the oportunity to do just that and spent a wonderful few days in Dorset with my partner. Although primarily to celebrate an anniversary, the pair of us needed to get some fresh air and we picked the perfect place to do it.

We chose the Jurassic coast in Dorset, famed for it’s dramatic coast and history. With a world heritage status, you expect something amazing. I’ve never been to the area before but I think it’s safe to say it’s now one of my favourite places in Britain.

We spent Saturday at Lulworth Cove, a beautiful natural cove carved out by decades of crashing ocean. We walked the local area, climbed the headland and strolled the stoney beach. Wrappped up in gloves and hats, even the cold couldn’t ruin the atmosphere and our bravery was well worth our effort. That night, we stayed in a little B&B so close to the water we could hear the waves in the night; bliss. 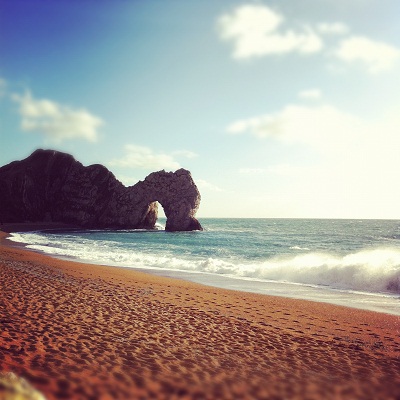 Sunday morning was spent at Durdle Door. This facinating stretch of coast had me captured from first sight; I found myself totally relaxed, it’s a long way from London! We spent lunch in one of the many small caves  looking out on nature at it’s best.

After dragging ourselves away, we drove onto Poole for a coffee and Twix on the beach. With the sun on our faces, we attempted a romantic beach stroll, but a rather gusty wind took pay to that idea; shelter in an alcove of steps was the best we could wish for. But despite the wind and the cold, the two days provided a much needed cheap break from the city lights. 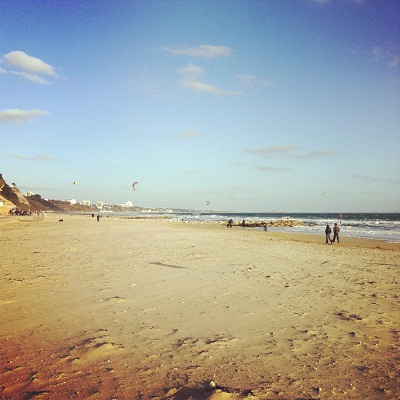 I’m not just sharing this to evoke jealousy, more advice; if a weekend away is much overdue, don’t hesitate to hire a car and go. This is defiantly a place to blow the cobwebs out, even more so out of season when it’s at it’s most blustery. The whole weekend took about £200 from our pockets, including petrol and food, not bad. Out of season is also quiet, relaxed and light on traffic.

If you need a mini break to do some big thinking, drive down to Dorset and let the view inspire you.